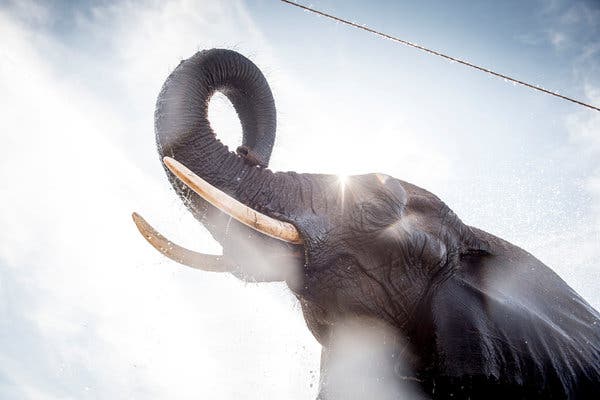 Elephants ought to get a lot of cancer. They’re huge animals, weighing as much as eight tons. It takes a lot of cells to make up that much elephant.

All of those cells arose from a single fertilized egg, and each time a cell divides, there’s a chance that it will gain a mutation — one that may lead to cancer.

Strangely, however, elephants aren’t more prone to cancer than smaller animals. Some research even suggests they get less cancer than humans do.

On Tuesday, a team of researchers reported what may be a partial solution to that mystery: Elephants protect themselves with a unique gene that aggressively kills off cells whose DNA has been damaged.

Somewhere in the course of evolution, the gene had become dormant. But somehow it was resurrected, a bit of zombie DNA that has proved particularly useful.

Vincent J. Lynch, an evolutionary biologist at the University of Chicago and a co-author of the paper, published in Cell Reports, said that understanding how elephants fight cancer may provide inspiration for developing new drugs.

Scientists have puzzled over cancer, or the lack thereof, in big animals since the 1970s. In recent years, some researchers have started carrying out detailed studies of the genes and cells of these species, searching for unexpected strategies for fighting the disease.

Some of the first research focused on a well-studied anticancer gene called p53. It makes a protein that can sense when DNA gets damaged. In response, the protein switches on a number of other genes.

A cell may respond by repairing its broken genes, or it may commit suicide, so that its descendants will not have the chance to gain even more mutations.

In 2015, Dr. Lynch and his colleagues discovered that elephants have evolved unusual p53 genes. While we only have one copy of the gene, elephants have 20 copies. Researchers at the University of Utah independently made the same discovery.

Both teams observed that the elephant’s swarm of p53 genes responds aggressively to DNA damage. Their bodies don’t bother with repairing cells — they only orchestrate the damaged cell’s death.

Dr. Lynch and his colleagues continued their search for cancer-fighting genes, and they soon encountered another one, called LIF6, that only elephants seem to possess.

In response to DNA damage, p53 proteins in elephants switch on LIF6. The cell makes LIF6 proteins, which then wreak havoc.

The proteins pry open holes in the mitochondria, allowing molecules to pour out. The molecules from mitochondria are toxic, causing the cell to die.

“This adds an important piece to the puzzle,” said Dr. Joshua D. Schiffman, a pediatric oncologist at the Huntsman Cancer Institute at the University of Utah who has also studied cancer in elephants.

More experiments are needed to confirm that LIF6 works the way Dr. Lynch and his colleagues propose, Dr. Schiffman added. “As a start, I think this is fantastic,” he said.

LIF6 has a bizarre evolutionary history, as it turns out.

All mammals carry a similar gene, simply called LIF. In our own cells, it performs several different jobs, such as sending signals from one cell to another. But almost all mammals — ourselves included — have only one copy.

The only exceptions to that rule are elephants and their close relatives, such as manatees, Dr. Lynch and his colleagues found. These mammals have several copies of LIF; elephants have ten.

These copies arose thanks to sloppy mutations in the ancestors of manatees and elephants more than 80 million years ago.

These newer copies of the original LIF gene lack a stretch of DNA that acts as an on-off switch. As a result, the genes could not make their proteins. (Humans also carry thousands of copies of so-called pseudogenes.)

After the ancestors of elephants evolved ten LIF genes, however, something remarkable happened: One of these dead genes came back to life. That gene is LIF6.

Somewhere in the course of elephant evolution, a cellular mutation inserted a genetic switch next to LIF6, enabling the gene to be activated by p53. The resurrected gene now made a protein that could do something new: attack mitochondria and kill damaged cells.

To find out when the LIF6 gene first came back to life, the researchers took a close looks at DNA retrieved from fossils.

Mastodons and mammoths also carried LIF6. Scientists estimate that they shared a common ancestor with modern elephants that lived 26 million years ago.

Dr. Lynch speculated that LIF6 came back to life at the same time that the ancestors of living elephants evolved extra copies of p53. As they developed more powerful defenses against cancer, the animals could begin reaching their enormous sizes.

“I think it’s all of the above,” he said. “There are lots of stories like LIF6 in the elephant genome, and I want to know them all.”